Maneki-neko (which literally translates as Beckoning Cat) is a popular statuette of Japanese origins. Experts believe that it first appeared in Japan during the Edo period (1603-1968).

The earliest documentation comes from the Meji Era (around the 1870s) in the form of a newspaper article. Around this time, Maneki Nekos clad in kimonos were given out at a shrine in Osaka. In 1902, an ad promoting money cats shows that these lucky cats were already popular at that time.

Of course, there are a few legends that claim that the Beckoning Cat appeared at a much earlier time.

Meaning of Each Feature

The Maneki-neko depicts a cat (believed to be a Japanese Bobtail) with a raised paw. You will find different versions of the Japanese lucky cat: some come with an upward right paw. Others come with an upward left paw. Tradition says that the one with the upward right paw attracts money while the one with the upward left paw attracts customers. So choose you figurine accordingly!

Here are the meanings of the Japanese lucky cat’s most common features:

Lucky cat figurines are recognized for this distinctive gesture: a cat beckoning with an upward, open paw and folded fingers. To many westerners, this gesture might seem like the cat is waving instead of beckoning. This is due to the different body language used by the Japanese. For the Japanese, a raised hand with open palm and folded fingers is a beckoning sign.

Don’t want to go wrong? Get a Maneki-neko that beckons with both paws at the same time! Or get two kitties, each beckoning with a different paw.

Another interesting tidbit is that in the traditional Maneki-neko, the paw rises just above the whiskers. You will find statuettes with paws extending beyond the whiskers though. The basis for this is that the higher the paw, the better the luck.

There are many legends associated with Japanese lucky cats. But the best-known story is that of Naotaka li, a samurai and an actual historical figure.

According to this legend, Naotaka was returning from a long trip when a storm came upon him. He sought refuge under a tree near a rundown temple. The monks from the temple kept a white cat, named Tama. Naotaka noticed the little white cat sitting at the temple’s door. To his amazement, Tama raised his paw and beckoned him.

Naotaka, startled by the cat’s gesture, left his shelter and walked towards the temple. Just as he entered the temple, lightning struck the tree. Amazingly, Tama had saved his life. From that day on, Naotaka took care of the temple and the little white cat. When Tama died, he was buried on the temple’s grounds and Naotaka had a statue erected in his honor.

According to another legend, the idea of a lucky cat came to a poor old woman in her dreams. This old lady had had a pet cat for a very long time. To her, he was her only family. However, due to her extreme poverty she almost had to give him up. Luckily, she had a dream in which her cat told her to make a cat figurine and sell it. She followed his instructions and her fortune was made.

Whether these stories have contributed to the popularity of the Japanese lucky cat is not known, but his following has steadily grown not only in the United States but also around the world. Maneki-neko is very popular in China, Hong Kong, Singapore, Thailand and several western countries. There are even fan clubs devoted to this lucky cat.

The Lucky Cat in Japan

The maneki-neko or beckoning cat is a good luck symbol in Japan. The cats, found in a variety of colours and styles, are usually sitting up with one paw raised in a gesture of beckoning. The Maneki-neko is a common sight in Japan, placed in the entrances of shops and restaurants, in the hope that she will bring good luck and prosperity in the form of customers and extra business. The cat’s colour, her attire and which of her paws is raised, even the height at which her paw is raised, all has significance.

The Origin of the Lucky Cat

There are many stories surrounding the origin of the beckoning cat, perhaps the most popular being the Legend of the Gotokuji Temple. This story, which is thought to date back to the beginning of the Edo Period (1603 – 1867), tells of a local priest, who looked after the Gotoku-ji Temple in Tokyo and kept a cat. Despite his poverty, the priest often shared his limited food with his cat. One day, during a storm a samurai sheltering under a tree at the temple saw the priest’s cat, apparently beckoning to him to come into the temple for shelter. Just as he approached the cat, a bolt of lightning hit the tree that he had been sheltering under, causing it to crash to the ground where he had previously been standing. Grateful to the cat that had saved his life, the wealthy samurai rewarded the temple with funding for its upkeep and adopted it as his family place of worship. When the cat died, it was honoured by being buried in a special cemetery and a statue was made in his likeness, thus initiating the image of the lucky cat we know today. 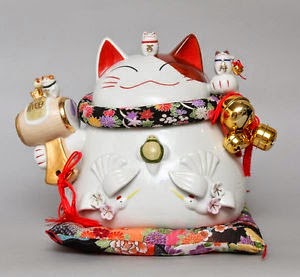